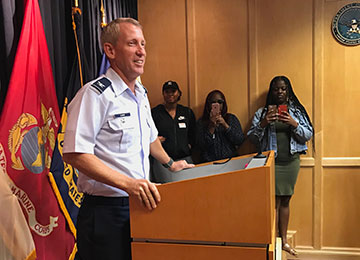 Caine’s vision is that by the time he leaves office, politicians are no longer piling debt onto American taxpayers and we have paid off a huge chunk of our national debt. He will fight to reverse the spending trend in Washington and make fiscal restraint a priority.

Leading large bureaucracies in the military, Colonel Caine saw on one hand, how budget cuts were done poorly through Obama’s disastrous Sequestration and on the other hand, how you could save taxpayers’ money without hurting our safety and security.

As a fiscal hawk in the Department of Defense, Colonel Caine took the highly unusual action of returning taxpayer dollars for programs that he deemed unnecessary, often to the shock of colleagues who said, “if you don’t spend it, they won’t give you more!”

As a Member of Congress, Caine will make it his mission to transform this bureaucratic attitude and the broken budget process in Congress that stokes it.